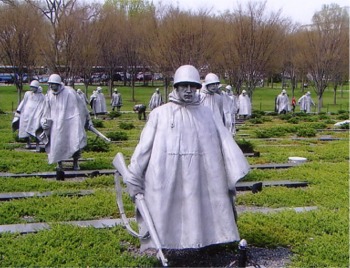 SEOUL—Beyond the barbed wire, guard towers bristling with machine guns and hundreds of thousands of men ready to go to war, this Asian nation has risen economically and has its share of tourist sites.

The War Memorial of Korea highlights more than 5,000 years of Korean history through thousands of exhibits.  The War Memorial is one of the best military history museums in the world.

A traditional Korean site is Gyeongbok Palace, which is close to the subway line.  Gyeongbok Palace was the home of kings of the Joseon Dynasty.  Initially built in 1394, it was destroyed many times during invasions by Japan.

For a great view, take an elevator to the top of the 777-foot Seoul Tower.  The ride costs $8.  On a clear day, visitors can see the sea near Incheon.

For tourists or business travelers with a full day, take a Demilitarized Zone (DMZ) tour.  Several companies offer tours to the DMZ, Panmunjeom, or both.  Some of the tours are half-day.  The trip to Panmunjeom is a full-day event.  The tours cost anywhere from $50 to $120.

Panmunjeom was the site of the cease-fire agreement that ended the Korean War.  One of the cool features of the trip is being in a negotiation room that divides North and South Korea.  Visitors can hop from North to South Korea in the room as the boundary runs down the middle of the room.

As part of the Panmunjeom tour, visitors go to Camp Bonifas, which is the base camp for the United Nations Command Security Force—Joint Security Area.  It is named for one of the U.S. soldiers killed in 1976 in a tree cutting incident in the area.  The Bridge of No Return, which links North and South Korea, is located in the area.  After the war, prisoners were exchanged at the bridge—if they chose not to cross—they could never go back to their native countries.

Another popular site is the 3rd infiltration tunnel and observatory.  The tunnel is less than an hour’s drive from Seoul and was discovered in October 1978.  It runs through bedrock about 100 feet beneath the ground.  From the observatory, visitors can view the North Korean village that was built to be a propaganda vehicle.

Because it still is a war zone, there are several requirements for tourists.  Passports are required and visitors must wear appropriate clothing (the area is constantly being photographed by North Korean guards—visitors are told they may use photos poorly dressed Americans in propaganda pieces to portray “decadent imperialists”).  Tour operators also tell tourists to not drink alcoholic beverages before the tour.   The U.S. and South Korean military can close facilities at any time without notification.

A great place to stay in Seoul is the Hamilton Hotel (www.hamilton.co.kr), located in the heart of Itaewon.  The hotel features a modern health center, sauna and a four-story shopping mall that has bargains on leather goods, shoes, jewelry and other goods.

The Itaewon area has many restaurants featuring food from all over the world—German, Pakistan, Switzerland, Italy and India.  Itaewon also is a great place to buy a custom suit for less than $300.

For a splurge, stay at the Ritz Carlton, (602 Yeoksam-dong, www.ritzcarlton.com).  The 410-room hotel features a great indoor pool and buffet breakfast.