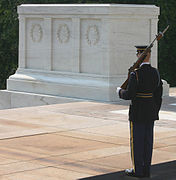 WASHINGTON—Unless a traveler has a month with nothing else to do, it is difficult to see most military history sites in Washington, D.C.  There are scores of statutes, monuments, museums and military cemeteries that are too numerous to mention here.

A good start is to see some of the “biggies.”  These include Arlington National Cemetery, the National World War II, Korean War and Vietnam War memorials.  Near Arlington Cemetery and Fort Myer is the Iwo Jima Memorial.

Although there are many activities such as the president laying a wreath on the Tomb of the Unknown Soldier, Recon’s advice would be NOT to visit Washington, DC during Memorial Day because of the crowds, the heat and transportation problems.  During a trip over Memorial Day weekend this year, the district’s subway, Metro, had several escalators not working at a few stations, forcing elderly tourists to walk up dozens of steps.  The system also did not have many Metro rail cars in service, making a normal 20-minute commute take an hour.

To get to the Vietnam and other memorials on the National Mall, go to these Metro stops:  Smithsonian, L’Enfant Plaza, Federal Triangle, Archives-Navy Memorial.

Some smaller sites worth seeing include:

Commodore Stephen Decatur, Jr. and his wife Susan Wheeler moved into a home built by Benjamin Henry Latrobe in 1818.  Already a celebrity from his conquests in the Barbary Wars and the War of 1812, Stephen Decatur became one of Washington’s most celebrated figures.  Unfortunately, the couple only occupied the house, which is located near the White House, for 14 months as Decatur was mortally wounded in a duel against Commodore James Barron on March 22, 1820.  Decatur House, http://decaturhouse.org.

Officially called the Joint Service Open House at Andrews Air Force Base, Md., the air show (each year in May) is one of the best and largest in the nation.  Some of the displays include vintage World War II aircraft such as the B-17 Memphis Belle, P-47 Thunderbird, Grumman TBM Avenger, Curtiss P-40E Flying Tiger, Japanese Zero and many others.  Modern airplanes include the V-22 Osprey, Stealth Bomber and others.

Off of Pennsylvania Ave. is a small park with a bronze statue of Gen. John Pershing.  The square also has informative maps and describes campaigns of World War I.

Located at 702 Pennsylvania Ave., NW, the Lone Sailor statute depicts a U.S. Navy bluejacket sailor.  The bronze sculpture was cast with metal or artifacts from some of the most historic warships—the USS Constitution and USS Maine and others.  The nearby Navy Memorial has a museum, gift shop and movie presentation.  Metro stop:  Archives-Navy Memorial.

Tours are available.  Each fall, the museum hosts the Seafaring Celebration.  Hours are 9 a.m. to 4 p.m. Monday through Friday.  Closed on weekends and federal holidays.  Washington Navy Yard, (202) 433-4882.

On Fort Myer, the Old Guard Museum tells the story of the U.S. 3rd Infantry Regiment, the Old Guard, from its Revolutionary War beginnings to today.   The museum, in Building 249, is open 9 a.m. to 4 p.m. Monday through Saturday and 1 p.m. to 4 p.m. on Sundays.  One of the prized possessions is the Chapultepec baton that was made out of a flag pole from the battle in the Mexican War.

Washington, DC is served by three major airports:  Dulles International Airport is located 25 miles from Washington in suburban Virginia; Reagan National, also in Virginia, is adjacent to town; and Baltimore Washington Airport, which is closer to Baltimore.

When doing your internet searches of the area, always include BWI, because you may find cheaper fares.  These fares can be offset by high cab rates, but public transportation is available from all three airports.  In fact, if you are willing to take a bus/Metro rail and travel light, you can get to Washington, DC from BWI for less than $7.

Renaissance Mayflower Hotel (1127 Connecticut Ave., NW).  Whether or not J. Edgar Hoover cross-dressed in this hotel is a matter of opinion.  Either way, it is a great place to see world politicians and celebrities.

W Hotel (15th & Pennsylvania Ave., NW) Several movies have been filmed there—including Godfather II.  Its 11th Floor outdoor verandah has some of the best views in the city, including the nearby White House.

Wardman Park Marriott Hotel (2660 Woodley Road, NW, 202-328-2000).  A business-class hotel in a good area of town.  If you have been to Washington for business or a convention, chances are that your meeting was held there.  It is a block away from the Woodley Park Metro and a half mile from dining and hot spots in the Adams-Morgan area.