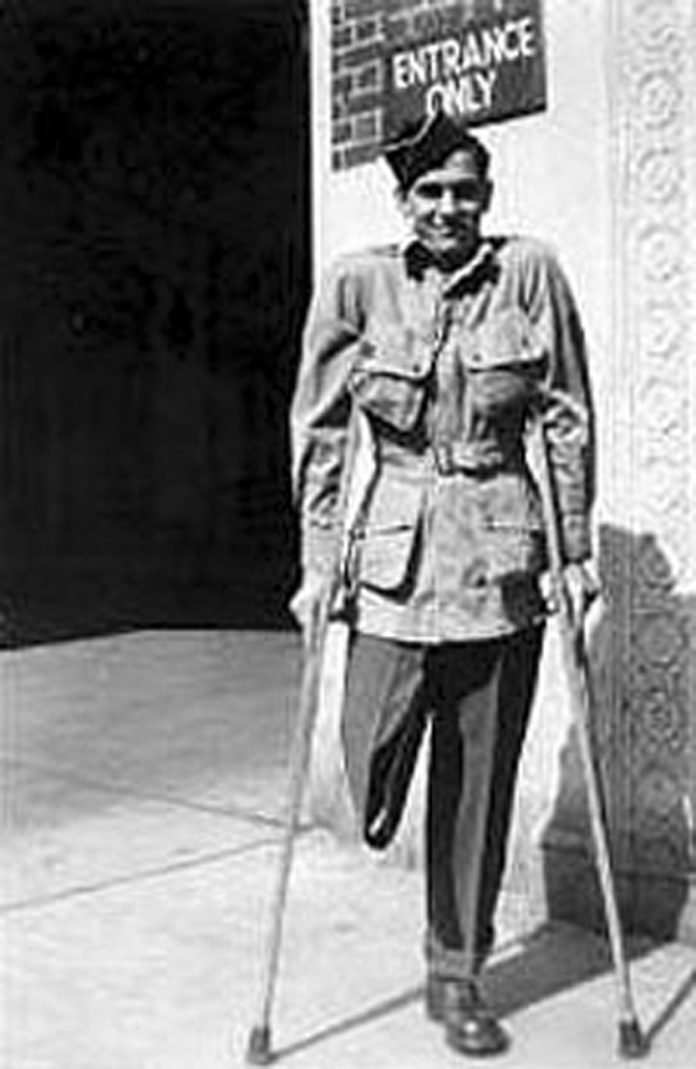 Bill Guarnere, who passed away in 2014, was a colorful character and a true American hero. Guarnere, along with other Easy Company members, parachuted into Normandy on 6 June 1944. He and his unit were portrayed in the HBO series “Band of Brothers.” This is an interview with Bill from 2006 in Recon Magazine.

The 101st Airborne Division was one of the most celebrated units of World War II. No unit exemplified the elite paratrooper attitude better than Easy Company, 506th Parachute Infantry, 101st Airborne Division.
The company, part of the 506th Parachute Infantry Regiment commanded by Col. Robert Sink, trained in such places as Camp Toccoa and Fort Benning, Ga.; Fort Bragg and Camp MacKall, N.C.; and in England. The unit made combat jumps into Normandy and Holland, toughed it through an epic battle at Bastogne and occupied Hitler’s Eagle Nest at the end of the war.
Recon contributing editor Mike Van Buren recently interviewed Bill Guarnere, who served as a staff sergeant in Easy Company during World War II. The unit was immortalized in Stephen Ambrose’s best-selling book and HBO mini series Band of Brothers. Guarnere, who lives in South Philadelphia, lost a leg above the knee at Bastogne. According to Band of Brothers, he was given an 80 percent disability and was not given a full disability until many years later. He grew up in Philadelphia, one of 10 siblings.

Recon: When did you decide to join the Army? Why the paratroopers? Did you enjoy parachuting out of a perfectly good airplane?

Guarnere: “Before the war, in Philadelphia, we never knew what was going to happen. We were thinking, are we going to get into the war? We didn’t know where Pearl Harbor was. After Pearl Harbor, most kids joined the Army, Navy or Marines. I was one of them—it was the right thing to do. The paratroopers were new and exciting. I told myself, ‘let me try it, if I make it, I make it.’ I enjoyed the parachuting—there is nothing like it. When you talk about the best, paratroopers were the best. Other outfits think they were the best, but we were.”

Recon: In the HBO series Band of Brothers, Maj. Richard Winters was revered as an example of a great leader. What are your memories of him?

Guarnere: “Lt. Winters, as we knew him, took over Easy Company on D-Day. He was the best officer, but he also inherited a pretty fine company. Capt. (Herbert) Sobel trained the company. Lt. Winters was a great combat leader. Sobel could not lead in combat. The sergeants of Easy Company got rid of Sobel. The officers knew it, but couldn’t do a damn thing about it.”

Recon: Was your first company commander, Capt. Herbert Sobel, really a jerk? The book and series portrays him as one. How about the depiction of Lt. Ronald Speirs as a tough and crazy officer? How was actor Frank John Hughes’ as Staff Sgt. William Guarnere?

Guarnere: “First of all, Sobel trained the company for war. Everyone knew he couldn’t lead in combat. Speirs was in D Company, he came to E Company after Bastogne. We heard all the stories about how tough he was. He was an excellent officer.
“Frank Hughes must have called me 250 times before the movie was shot to ask all kinds of questions. I told him he can’t get perfection. He called me so often that I told him to sit down and remember no matter what he did in the series, we won the goddamn war—so don’t worry about it. He did an excellent job. The casting was excellent. All of the stories were true. The best part of the series was the last (episode) that explained what became of the men after the war.”

Recon: Did your training in Georgia and in England prepare you for the horrors and rigors of war? What was your favorite weapon?

Guarnere: The training was realistic. My favorite weapon was the 45-caliber Thompson submachine gun. You couldn’t shoot too far with it, but it was my favorite.

Recon: Did you hate the Germans you faced in battle? What were your overall perceptions of the German soldiers you faced?

Guarnere: “I was a wildman. When I initially went into combat, I learned my brother had been killed in Italy. You didn’t want to be a German around me. The first day in combat, every German I saw, I killed him. I don’t know how I made it through that day. I have been to Europe 16 times and have visited my brother’s grave. He was killed at Monte Cassino. You don’t realize it at the time, but you weren’t alone in combat—it happened everywhere. My hatred of Germans is gone. The war is over.
“I’m Italian. There were no inner conflicts about fighting a war—because it was a war of survival…Italians were once the enemy. You think about it, you are dead.”

Recon: Normandy, Holland, Bastogne, Foy…all were tough campaigns and battles for the 101st Airborne. Is there any particular battle you feel that was the toughest or have the most memories about?

Guarnere: “They were all different. Most of my memories were of D-Day. That was the biggest (operation). We linked up with the infantry coming up on the causeway from Utah Beach. In the battle for Brecourt Manor (editor’s note: Winters won the Distinguished Service Cross for heroism during the battle), it was a fast battle, we were full of adrenaline and we were exhausted when the battle was over. The Germans did not even know we were there. After the battle, I went to the top of a hill to search for Germans. I fell over, dead asleep. Another soldier, Joe Toye, thought I was dead.
“Holland was a fiasco, run by the British, a failure. Before Operation Market Garden, (British Gen. Bernard) Montgomery knew that were enemy armored divisions in the vicinity. The British soldiers fought like lions, but were led a bunch of goddamn donkeys. But the worst was Bastogne in December 1944 because of the conditions, the cold. Because of that battle, medics are still my heroes.”

Recon: What did you do when you got home from the war? How did it change you?

Guarnere: “First thing I did was get married to my girl Frannie, who was waiting for me. I had kids and went to work. I tried to forget about the war. No one talked about the war at all. I was on crutches. When people asked about them, I would tell them a shark bit my leg off. I didn’t talk about the war for at least 50 years.”

Recon: Are you planning any trips to Europe? Have you recently returned?

Guarnere: “In September 2006, Babe Heffron and I are chaperoning a tour.”

Guarnere: “I couldn’t care less about seeing a war movie. The way combat is portrayed is like a fairy tale. One seemed realistic—1949’s Battleground, which focused on the 327th (Glider Infantry) at Bastogne. Gen. McAuliffe, from what I have heard, and I have spoken to a few generals about it, really did say ‘nuts’ to the Germans when they asked for us to surrender. He didn’t know what else to say, Gen. Kennard said later. The 101st got all of the publicity during the Battle of the Bulge. We were surrounded, but there was fighting all over the damn place by a lot of other units.
“There were a few inaccuracies in the series. There was too much cursing in the series by the soldiers. I never cursed like that around my children.”

Recon: Do you still keep in touch with members of Easy Company? Who is the company’s greatest unsung hero?

Guarnere: “I still keep in touch with Babe Heffron and others. In 1947, we had our first reunion, I couldn’t attend because I was still in the hospital. There were 13 Easy Company men in attendance. We asked each man to bring another man to the next reunion. Every year, I run an Easy Company reunion. Capt. (Lewis) Nixon was a good man. He used to go to the reunions.
“(Four-time Purple Heart recipient) Joe Toye was the greatest unsung hero. He was from West Reading, Pa. He attended the reunions as well. I think of all of them. I think about them to keep their memory alive…the ones who have died can’t keep their memory alive, so I do it.”

Recon: Is there one thing you want people to remember about Easy Company?

Guarnere: “Let people remember Easy Company, but also remember that many units and countries helped to win that war. The Navy, Air Corps and Marines. The British, Canadians, Australians, South Africans, New Zealanders and many others. When I speak to groups, I let people know that without the U.S. Navy, we never would have won the goddamn war.”

Recon: What is the greatest single lesson from your war experiences that carried over to civilian life?

Guarnere: “There is no glory in war…it is simply hell. I can’t explain it. You have to be there to experience it. It is like trying to explain freedom to kids who don’t know about it. You don’t know what freedom is until you lose it. When you look at the war, you survived it. Take Christmas time, in 1944, it was a different time. We had three or four years of routine 911s (in terms of daily casualties).
“My brother, Henry, earned quite a few decorations as a medic. We used to correspond—and letters were tough to get. All of sudden, they stopped. (Fellow Easy Company soldier) Johnnie Martin told me he had been killed. My older brother, Ernest, was in the Merchant Marine and was torpedoed and was listed for six months as missing in action. You are young and fighting a war. You never give a thought what your parents went through—three sons in the service—all in combat zones.”

Recon: What do you think about the decision to drop the atomic bomb to end World War II?

Guarnere: “I thank Christ for that. The generals and political bigwigs stopped sending supplies to Europe because they were getting ready for an invasion of Japan. They say it would have been more than 1 million casualties. It saved lives. Remember Pearl Harbor.”